We are often asked, "What is the difference between an alpaca and a llama?" and "is that a baby llama" which is said while pointing at our herd of alpacas.

These are very good questions!  A few years ago we did not know the answer to any of these questions either. We are going to tell you a little about alpacas so you will be more knowledgeable.  When someone asks you "What is an alpaca?" you will know just how to respond!

Alpacas use to be classified as "exotic animals" but now they are considered to be genuine livestock - just like sheep, goats, and cows.

They are also ruminants (really, pseudo ruminants meaning that they chew their cud) and have a four chambered stomach.

Alpacas are members of the camelid family.  This family contains the camels, alpaca, vicuna (VI-coo-nya), llama, and guanaco (wah-NAH-co).  The latter four animals are also called South American camelids because - you guessed it! - South America is their native birthplace.

The main difference between llamas and alpacas are that llamas are bigger and have banana shaped curved ears.  Alpacas are smaller and have perky spear shaped ears.  Unless you see them next to each other, it can be difficult to distinguish between them.

The sure (SER-ee) and the huacaya (wah-KI-ah) are the two breeds of alpacas.  The huacaya looks like a cute teddy bear with thick cuddly fleece.  The suri has long silky dread locks.

Both breeds exhibit the typical alpaca behavior of the kush, the pronk, and the alpaca spit.  Kush is how an alpaca folds its legs under its body to lay down.  Pronk refers to the bouncy way an alpaca run/bounce through the pasture.  Do not worry!  They mostly spit at each other, typically over food.

Did you know that alpacas are the ultimate green livestock since they are so eco-friendly?  They have padded feat which are gentle to the ground and don't tear up the terrain.

They grow luxurious fleece (fur) which can be harvested by gently shearing the alpaca once a year.  The fleece can then be spun into yarn or felted to make a number of quality items - Like the ones found in the Diamond Valley Alpaca boutique - such as sweaters, jackets, socks, hats, gloves, and decorative housewares!

Even their poop is awesome! Since alpacas have a four chambered stomach, they digest their food (grasses and hay) really well and don't leave behind undigested seeds which can germinate and regrow in your garden.  Their waste is low in nitrogen and ammonia which means that it won't "burn" your precious plants. We use this Sh..... stuff on our own garden!

WHAT IS AN ALPACA? 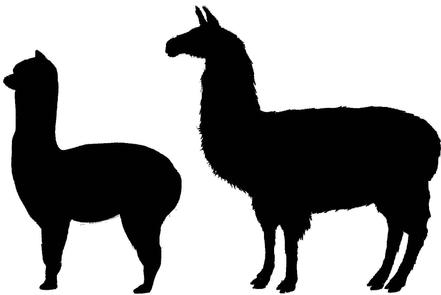